Newport Animal Hospital has seven full-time veterinarians dedicated to providing your pets the very best healthcare throughout every stage of their lives.

Dr. Wood attended The University of Rhode Island’s Wildlife Biology and Management program. He then moved to Montana and attended Montana State University, where he completed the Pre-Veterinary curriculum. He then attended Colorado State University, where he received his Doctorate of Veterinary Medicine in 2006. He spent the next year practicing general veterinary medicine in Connecticut, and then relocated to Montana, where he spent 5 years working, not only as a general practitioner, but as an emergency veterinarian as well. In 2010, Dr. Wood decided it was time to return to his native state, Rhode Island! He joined the Newport Animal Hospital Team in January of 2011, and we couldn’t be happier! Dr. Wood’s special interests include cruciate ligament repair surgery in dogs, offering both the lateral suture technique as well as the Tibial Tuberosity Advancement (TTA) procedure. Other interests include oncology and chemotherapy, general surgery and pain management.

Originally from Massachusetts, Dr. Fain received her undergraduate degree from Tufts University (1991), and a Master’s degree in Wildlife Biology and Management from Colorado State University (1995). From there, she entered Colorado State’s Veterinary program where she received her DVM in 1999. Her current veterinary interests include emergency medicine, reproduction, infectious disease and soft tissue injury. Outside of work she enjoys sailing, skiing, hiking and just about any outdoor activity. Dr. Fain has always considered it a privilege to be able to serve others through helping their companion animals, and looks forward to building relationships with her clients and their pets each day. 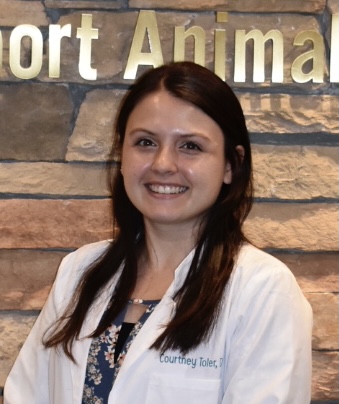 Dr. Courtney Perry is a recent graduate from Tufts Cummings School of Veterinary Medicine. She graduated from the University of Rhode Island in 2017 with a Bachelor of Science in Pre-Veterinary Animal Medicine, as well as a Bachelors in Biological Sciences. While working towards her undergraduate degrees, she started working at Newport Animal Hospital as a kennel attendant, and then a veterinary technician. Dr. Perry has always had a love of animals, and currently lives with her fiancé David, their cat Daphne and two ferrets Roscoe and Daisy. Dr. Perry has an interest in small animal internal medicine, exotic companion animal medicine and soft tissue surgery.